The face of deception by Iris Johansen 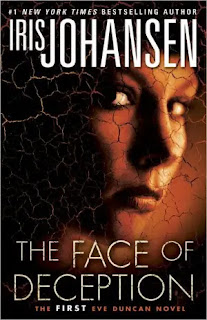 This is the first book of the Eve Duncan series. She had lost her daughter and uses her work to hide all her feelings by doing what she knows best. She's been given a skull to work on so she can find out who she is. The skull, may not be her daughter but, she's someone elses. Joe Quinn is a cop and a good friend of Eve's. She will do her best to help him when he asks her too.

When she finds out that there's a billionare wanting to talk to her. She pretty much says no. She has a job to finish. Then, when he shows up at her door. She gets quite angry. She asks him what he wants. He introduces himself as John Logan and he wants her to do what she does best.

Logan doesn't tell her the whole truth about everything and she knows he isn't. She's head strong and does what she can to keep him on his toes. What she finds out is going to make things very dangerous for them both.

The President of the United States has been killed or suppose he has. The first lady, Lisa contacts Eve to tell her she wants the skull or she will be killed along with everyone she knows, including her mom. She's only talked to Joe a few times since all these things has happened. Being the Joe wants to protect her, he decides to come get her. That wasn't going to work out.

In Joe, all this is just crazy and he needs to do something.

I will say, Logan is one of those guys that doesn't care about anything but bringing down Lisa. Even though there's someone out there trying to kill them, he knows what he needs to do. He's smart and rich but, he may just end up getting Eve killed.

Over all, You'll have to read the book to find out what happens. Its a fast read too.

I'm off to start another book. Remember to pick up a good book, you never know you might just enjoy what you read.

The face of deception by Iris Johansen

This is the first book of the Eve Duncan series. She had lost her daughter and uses her work to hide all her feelings by doing what she kno...